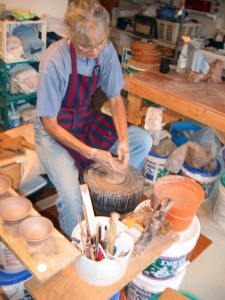 The potter at work

I was born and raised in Connecticut and lived in various places in the East and Midwest.  My family and I moved to Minnesota in 1985, and I have refused to leave ever since.  We lived in Roseville while our children were growing up, and moved to Northfield in 2004.

I had no experience with real clay as a child.  In the early 1990s, I came across some clay in the woods near a pond, took some home, searched the library for information, cleaned the clay, made pinch pots, and fired them in the fireplace.  Loved it.  Loved the idea of starting with earth and ending with dishes.

I started taking pottery classes at the Northern Clay Center in 1996, then apprenticed with Richard Bresnahan, at the St. John’s University Pottery, from 1999-2002. In order to be able to build a wood-fired kiln, my husband and I bought land in Bridgewater Township, six miles south of Northfield. We built a house in 2003, and moved in January of 2004. The third version of  the wood-fired kiln was built in the summer of 2010, finished in 2016, fired once, and has just now received a proper chimney. In 2014, potter Glynnis Lessing and I purchased a propane kiln, which we used to fire our work. Glynnis now has her own kiln, as I am firing with various friends and apprentices.